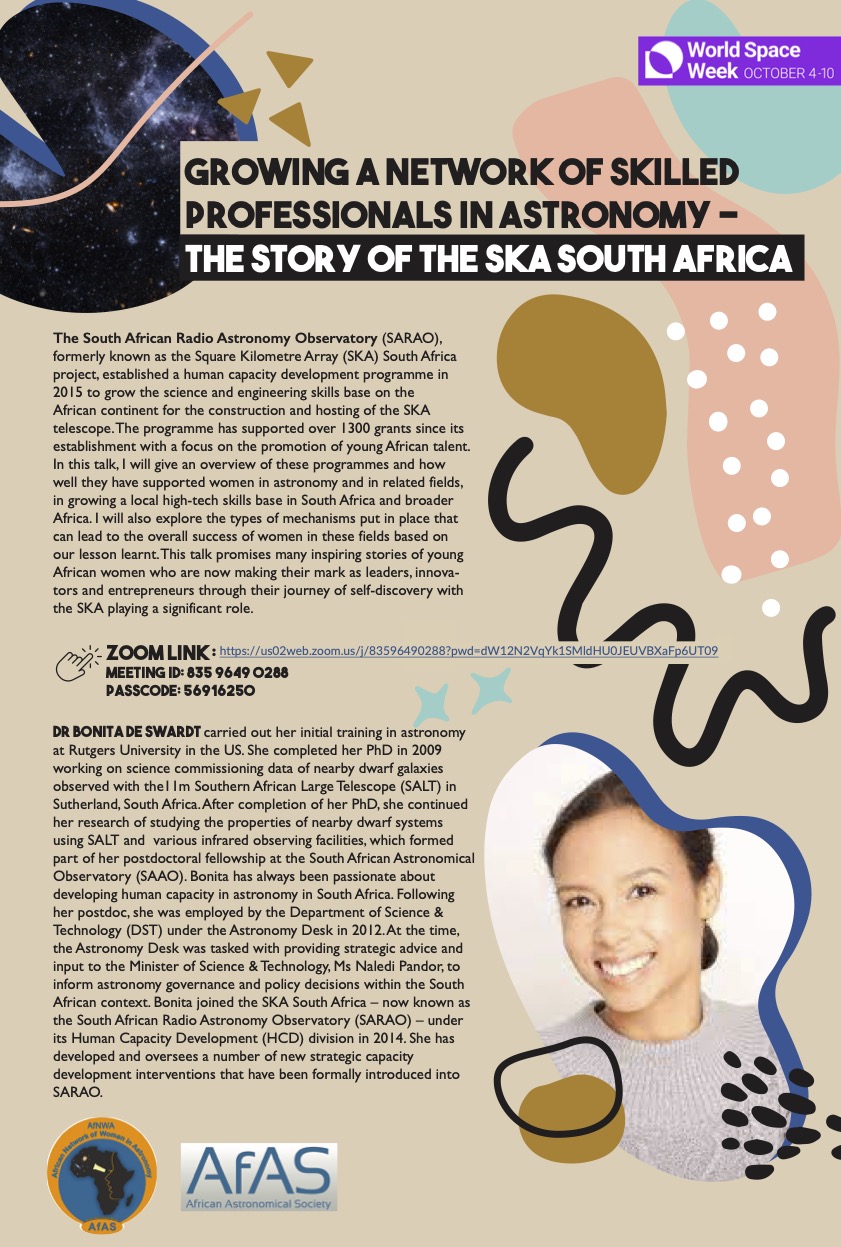 The South African Radio Astronomy Observatory (SARAO), formerly known as the Square Kilometre Array (SKA) South Africa project, established a human capacity development programme in 2015 to grow the science and engineering skills base on the African continent for the construction and hosting of the SKA telescope.The programme has supported over 1300 grants since its establishment with a focus on the promotion of young African talent. In this talk, I will give an overview of these programmes and how well they have supported women in astronomy and in related fields, in growing a local high-tech skills base in South Africa and broader Africa. I will also explore the types of mechanisms put in place that can lead to the overall success of women in these fields based on our lesson learnt.This talk promises many inspiring stories of young African women who are now making their mark as leaders, innova- tors and entrepreneurs through their journey of self-discovery with the SKA playing a significant role.

The Speaker:
Dr Bonita de Swardt carried out her initial training in astronomy at Rutgers University in the US. She completed her PhD in 2009 working on science commissioning data of nearby dwarf galaxies observed with the11m Southern African Large Telescope (SALT) in Sutherland, South Africa.After completion of her PhD, she continued her research of studying the properties of nearby dwarf systems using SALT and various infrared observing facilities, which formed part of her postdoctoral fellowship at the South African Astronomical Observatory (SAAO). Bonita has always been passionate about developing human capacity in astronomy in South Africa. Following her postdoc, she was employed by the Department of Science & Technology (DST) under the Astronomy Desk in 2012.At the time, the Astronomy Desk was tasked with providing strategic advice and input to the Minister of Science & Technology, Ms Naledi Pandor, to inform astronomy governance and policy decisions within the South African context. Bonita joined the SKA South Africa – now known as the South African Radio Astronomy Observatory (SARAO) – under its Human Capacity Development (HCD) division in 2014. She has developed and oversees a number of new strategic capacity development interventions that have been formally introduced into SARAO.

AfNWA is a part of the African Astronomical Society, a professional society of astronomers and space scientists in Africa.